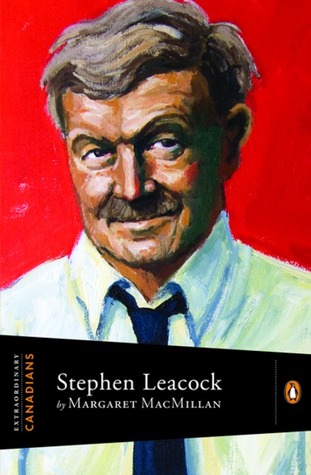 After reading a couple non-Canadian titles, I’ve been getting geared up to roll through the choices for Canada Reads 2015 so I can pick a horse. Before that though, I wanted to knock off another title in the Extraordinary Canadians series. Canada Reads is a celebration of Canadian writing and the particularities that make it unique; in that vein, I decided to read Margaret MacMillan’s entry in the series, Stephen Leacock. Why is Leacock worthy of being named an extraordinary Canadian? Simple, he was one of the most important writers in Canadian cultural history and is one of the fathers of the CanLit movement. Additionally, he is the father of Canadian humour (Haliburton being the grandfather) and his sketches paved the way for comic and satirical writers like Robertson Davies, Mordecai Richler, Stuart MacLean, Terry Fallis, and the list goes on. Without Leacock, 20th century Canadian literature would look a lot different.

In terms of the book, I was very much looking forward to reading it. I’ve read a reasonable amount of Leacock and know of his importance to our literature, but I really knew very little of the man himself. Margaret MacMillan, the acclaimed Canadian historian/academic and author of the well-known volume Paris 1919. Stephen Leacock is a mix of the standard and the interpretive forms of biography. In the first few chapters, MacMillan lays out the overarching legacy of Leacock, an overview of his life and career, and of course his writing. The subsequent chapters follows a more chronological telling of his life with enough detail that you can really sense what made Leacock tick. And finally, a short chapter at the end details the legacy of the great humourist.

The strength of this biography is the way MacMillan weaves in quotes from Leacock’s writing and her unflinching honesty about much of his writing and his personality in general. Leacock has legendary books – Literary Lapses, Sunshine Sketches, Arcadian Adventures, My Remarkable Uncle – but he also wrote a lot of rather dull pieces and much of his humour, especially his later works, haven’t aged well, if they were ever funny to begin with. But, the great works produced an international celebrity on the lines of Stephen King today. The author also does a great job tracking his rise as a public intellectual, his mediocre career as an academic, and his rather unremarkable personal life.

The central thesis of this biography is this – Leacock was arrogant, he was greedy, and he carried many of the sexist and racist views of his time. Ultimately though, who cares? He was a paradigm changing writer who is an essential cornerstone of CanLit who’s still widely in print today.

Margaret MacMillan’s short book gets to the major points quickly, is highly readable, and really explores his writing in an accessible and non academic-ese language. Like Maurice Richard, the book also does a great job or outlining why Leacock is, in fact, an extraordinary Canadian. This is the second book in the Penguin Extraordinary Canadians series that I have read, and so far I’m very pleased. As I mentioned before, I wouldn’t read a huge multi-volume biography of most of the subjects in the series, including Leacock. But, because of this series and MacMillan’s pared-down book, I now know the essential story of an important Canadian.