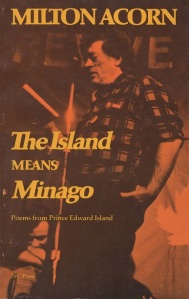 When someone thinks of PEI literature, the first image to pop into their mind would be that of Lucy Maud Montgomery and her little redhead Anne. I’ve written on this blog many times before about the development and current state of PEI literature and how the last 25 years has really been a high point for writing in the province. There was very little early (pre-1950s) PEI literature worth discussing. Lucy Maud really was the grandmother of PEI writing and her contemporary Sir Andrew Macphail was the grandfather with his masterpiece The Master’s Wife. But, PEI lit as we know it now was really founded in earnest with Milton Acorn’s 1956 self-published mimeographed chapbook In Love and Anger. Acorn was a very different voice from his contemporaries; he was a working man’s poet. A World War II veteran with little formal education, The People’s Poet spent most of his life living off a Veteran’s Affairs pension due to war injuries. Some of his titles were best-sellers in Canada and he was a superstar in the world of poetry – even marrying Gwendolyn MacEwen for a short time. The 1975 collection The Island Means Minago, his only collection to win the Governor General’s Award, is Acorn’s most ambitions treatise on his home province and contains many of his signature poems.

The Island Means Minago is a very cohesive volume, both in terms of narrative and themes. It mixes narrative poems, lyrics, prose pieces, dramatic scenes, and photos to tell the story of his people.  Right in the opening poem, Acorn’s love of his island is evident:

In the fanged jaws of the Gulf,
a red tongue.
Indians say a musical God
took up his brush and painted it,
named it in His own language
“The Island”.

In terms of narrative, Acorn takes on a number of issues prominent in Island history (honestly, if you’re familiar with these items it makes this a much more enjoyable book): the absentee landlord problem from the 19th century and Island Development Plan that began in the 1960s that would be top of mind in 1975. Acorn uses these narratives to tie together the thematic concept of this book. It is no secret that he was a far-left socialist, and that is the lens through which the author writes. He lambastes capitalism, roasts the ineffective administration of the government for not representing the people, and takes up the cause of the proletariat.

As I mentioned, Acorn was the working man’s poet. He was a big personality and it is easy to envision him reciting these poems in a pub throwing back beers and shots of whiskey. His language is accessible and free of those 20-dollar-words too often used by MFA graduates. But, that is not to say that these poems are “simple,” quite the opposite. Acorn manipulates genre and form in fascinating ways, he often uses an isolated rhyme as a narrative turning point, he creates intriguing imagery while using down-home dialect, and he is very cognizant of the sound, the music so to speak, of his poetry by doing interesting things with repetition, dialogue, and syllable structure.

An element of this book that was interesting was the collection of prose pieces. Each of the three sections has one prose piece, with each being about 10 pages in length. It is hard to classify these parts – as I said, he does interesting things with genre. These three pieces are not prose poems, but they’re not exactly stories either. They’re something of a blend of history, storytelling, social commentary, and political treatise. These prose pieces were excellent additions to the poems because they provide some historical and socio-economic context and further entrench Acorn’s socialist themes.

Finally, the actual physical volume itself is an interesting specimen. It was published by NC Press, who according to the ads in the back of the book, published the paper New Canada, that reported “on the struggles being waged across the country for independence and socialism” and was also the leading publisher of books and documents from the People’s Republic of China. So, the strong leftist overtones shouldn’t be surprising.

I’ve said before that PEI has the most nationalistic literature and sense of identity in general in English Canada. This collection was one the flashpoints for this Island literary tradition. The Island Means Minago is a great example of Maritime and PEI poetry, an excellent collection of historical poetry, an interesting political exposition, and just an overall engaging read.