The Destiny of Canada by Christopher Pennington 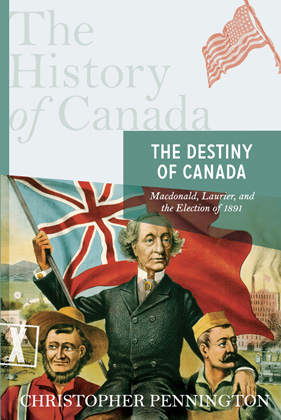 Penguin’s History of Canada series is one of my new favorite collections. I’ve collected all of the paperback releases and have them on a shelf with Oxford’s Wynford books and Penguin’s other fantastic series, Extraordinary Canadians. The Destiny of Canada, Christopher Pennington’s tale of the 1891 federal election, is the second book in the series that I have read (the first being The Last Act). Pennington takes the reader into the backrooms of the Macdonald and Laurier campaign; legends of Canadian history become fascinating characters (Sir Charles Tupper is my favorite). This book is like porn for the political junkie but is written in a way that anyone with even a passing interest in Canadian history will enjoy.

Pennington’s research was incredibly thorough. It is clear that he must have read thousands of newspaper articles as well as previous academic research. The tone of the book is somewhat sardonic; Pennington goes into great depth on the rampant corruption in almost every element of Canadian politics, but, instead of taking a judgmental tone, he simply expounds the details with a tongue-in-cheek wit. The author makes the case that the 1891 election was one of the most important in our history and it has largely been overlooked. Canada never had an election like the 1860 US vote, where the outcome would bring Earth-shattering consequences; the 1891 election was probably the closest to that which we have had. At stake, argues Pennington, was the fate of Canada. Would we travel down a road that would possibly lead to American annexation or would we stay on the current path which was bringing about severe economic hardships?

Sir John A. Macdonald was the star of the book. Laurier was obviously important, but at this early point in his career, he didn’t have the same gravitas as Sir John. I’ve really come to the conclusion, after reading many books on early Confederation, that Sir John A. was a Machiavellian political master. He did have major accomplishments: he was a leader Father of Confederation and under his reign he added all the territory save Newfoundland to the country, completed the railway, instituted the National Policy, and created what would become the RCMP. But, he also manipulated, bribed, “boodled,” and did just about anything imaginable to hang on to power. The author notes in the epilogue that Laurier was the same when he came to power. This behavior has to be taken into context though; this was perfectly normal and somewhat accepted as politics as usual in Canada in the 19th century. These details have simply been scrubbed out of junior high history books.

The book is filled with all kinds of interesting tidbits. It was common for individuals to run in multiple ridings to hedge their bets and running and serving concurrently in provincial and federal houses was common. And, what interested me very much, were the mentions of the insanely ambitious discussions in the 1880s and 90s to build a tunnel from PEI to NB.

The Destiny of Canada is a fantastic entry in the History of Canada series. It is very readable, it has a solid narrative flow, it is incredibly well researched, it is both balanced and thorough and there are several pages of portraits of the important figures and a good number of editorial cartoons. This book would be enjoyed by Canadian history enthusiasts, political junkies, or anyone who enjoys quasi-political TV shows like The West Wing or Veep.