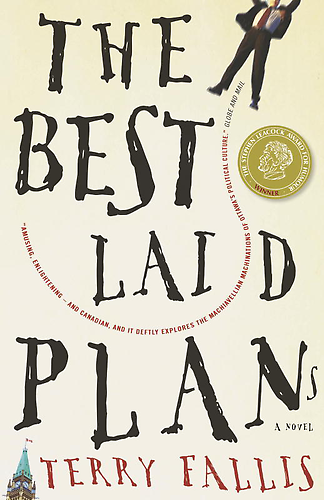 Winner of the 2008 Stephen Leacock Award for Humour

The story behind The Best Laid Plans and its publication is a story in and of itself which I am sure most readers are familiar with by now. After countless rejections from publishers and agents, Terry Fallis recorded a podcast of his new novel and then self-published it through iUniverse. After winning the 2008 Stephen Leacock Award for Humour, beating out serious heavyweights Douglas Coupland and Will Ferguson, the book was published by one of Canada’s most storied houses, McClelland and Stewart. This book combines two of my favorite things, literature and politics. I have read a number of winners of the Leacock Award in the past and have been disappointed more often than not; The Best Laid Plans is, without a doubt, one of the funniest books I have ever read. A political thriller in the truest sense of the term: this novel is eyes-deep in the political machinations of Ottawa with a twist and turn around every corner. With hilarious narration and page after page of memorable comedy, The Best Laid Plans is going to be a contender that I can see making it right to the final round of Canada Reads this year.

I think the magic in this book is that it both captures the country’s cynicism towards politics and delves into the reasons behind that cynicism in a very funny way. As the plot unfolds, we see the cantankerous Angus McLintock unexpected and unwanted election to the House of Commons and his direct march against the political grain. The character development is absolutely incredible and the subplots are tied in so seamlessly that we are instantly drawn into this mosaic. Something that has to be mentioned about this book is that behind the humour, the unforgettable cast, the epic chess battles, and the harrowing hovercraft trip rests a very serious message: the future of our nation and many of the cornerstones of our society are being run by people with short-sighted and self-serving agendas. Our public servants have lost the ability the put the nations long-term interests ahead of winning the next election, ahead of their polling numbers, and ahead of their own careers. Had this novel been written in a dramatic style, it would be a complete snore, despite the importance of the central themes. This is humour at its best.

An exposé on the ridiculous behemoth that our democracy has become,  The Best Laid Plans should be required reading for all MPs and MLAs/MPPs/MHAs at the beginning of each session. Looking beyond the contents of the novel, I think the publication story behind this book should serve as a lesson on the culture of elitism that has emerged amongst many Canadian publishers. It seems that unless you are either a university English professor or a recent graduate from an MFA program (and many people know how I feel about MFA programs and the damage they are doing to the North American literary scene) the deck is stacked against you in getting that first book published. What changed about The Best Laid Plans after it won the Leacock Medal? Nothing, except the publishing community realized what a grievous error it had made.

Canadians love their arts, their sports, and their politics. I think that the final two books standing in the battle for the Canada Reads crown will be this title and The Bone Cage. Ultimately I think The Bone Cage will win because I believe it will resonate with more people and humour generally has  a rough go on this show. In terms of “which is a better book”, they both get 5 stars in my mind. As he opened his endless parade of rejection letters, I wonder what Terry Fallis would have thought if someone told him he would win one of the most prestigious literary prizes in Canada and then be on Canada Reads a few short years later with the sequel, The High Road, coming out in 2010.