Not Wanted on the Voyage by Timothy Findley 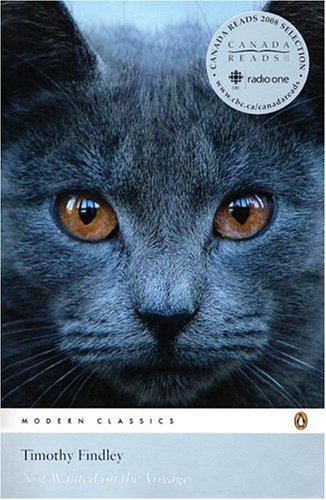 Shortlisted for the 1984 Governor-General’s Award for Fiction

Not Wanted on the Voyage, much like Timothy Findley’s writing in general, tends to be a love-it-or-hate-it thing. Before I started reading this book I read some reviews online, most of which were from 2008 when the book was on Canada Reads, and many were not overly positive. I really enjoy Findley, Pilgrim being one of my favorite books, so I was looking forward to reading this. I loved it. This novel has taken on the status of a modern classic, evidenced by the fact that the most recent publication is part of Penguin’s Modern Classics series. On a topical level Not Wanted on the Voyage is a retelling of the biblical flood tale with a feminist twist, but there is a lot more than this going on in this story. Amongst the themes that are examined are family roles and dynamics, the danger of being at the mercy of your faith, and the arbitrariness of nature. I thought this book was very funny in parts, but painfully gruesome in others.

I think only Timothy Findley could pull off a biblical revisionist novel from the narrative point-of-view of a blind 20 year old cat. This cat, Mottyl, makes the book. The first 20-30 pages were very difficult to get into but once the ancient and decrepit Yaweh finally arrives for his visit with the devoted Dr. Noah Noyes the forward motion of the story really picks up. There are so many memorable scenes on both sides of the scale. Some of the funniest moments include Mrs. Noyes conducting her chorus of singing sheep, the Noyes’s son Japeth being marinated by barbarians in preparation to be eaten before he escapes their capture, resulting in his skin having a permanent blue hue, and the countless incidents of Mottyl narrating the everyday life of an old house cat. But there are other scenes that are as disturbing as the previous mentions are funny: the surplus animals on the Noyes homestead being burned in a giant pyre, Lotte’s throat being slit and birds pecking out her eyes, and the famous scene which is always associated with this book where Noah rapes his 11 year old daughter-in-law with a unicorn’s horn, killing the unicorn in the process, in order to prepare her for her husband. Between the violence and blasphemy there is something to offend almost everyone; it is definitely not for the pious Sunday church going crowd.

The animals are very memorable in this book. There are dog-sized unicorns, one- and two-headed demons that emit fire, and talking critters of every variety. Findley does a masterful job of the imagery and painting a picture of times long past. He gets down to the most minute details using beautiful metaphors. My one criticism of the book is his use of one particular character: Lucy. I will issue a spoiler alert here. Lucy, we find out early in the book after Michael Archangelis (clever right?) does battle with a dragon, turns out to be Lucifer in a human guise. He has taken this form and married one of the Noyes children in order to gain passage on the ark and avoid certain death. Very little was done with this character, but yet, (s)he is still an intriguing and essential part of the story.

This book constantly challenges the reader’s sense of good and evil; forcing the reader to realize that not all is black and white and there is often times ambiguity in doing something that is ultimately good. Not Wanted on the Voyage is a very rewarding book. Now to be honest, it is a fairly slow read, it is dense, there are points where there is not a lot of forward motion, and if you are reading the Penguin Classics printing it suffers from the usual problems of this line: very small print, a lot of text on the page, and page breaks are at a minimum. To enjoy this book you need to allow the humour to reach you and realize that this really is a foolish idea for a novel; therein again lies the ambiguity. This story joins a long list of other Canadian novelists reworking biblical stories, such as A Time for Judas or Testament. If you are still having doubts, this novel is worth reading for the the simple reason that it will explain what is going on behind your cats creepy and shiny eyes.